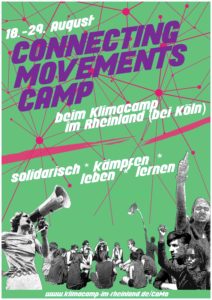 Of course, this call isn’t issued out of the blue. We are a small group of people who have been active in different leftist/emancipatory/revolutionary contexts in the last years, and who got together with the vision to organize a space of exchange and networking of movements during the climate camps in Germany in August 2017. Some of us were already active at past climate camps and in the areas of queer-feminism, anti-racism, or agriculture, and organized “barrios” (Spanish for quarters) dealing with these topics at last year’s Klimacamp. We are getting together because we want to break out from the isolated discussion of different topics, want to find common points, discuss boundaries, and grow stronger together. Therefore there will be an autonomous area next to Klimatecamp with the name Connecting Movement Camp in august!

Some of the questions we are thinking about
How is climate change influencing access to land, and who can survive as a producer under the conditions of a globalized, industrialized market? How is this related to causes of flight and migration? Is it possible to strengthen the global movement of food sovereignty here in the industrialized north? How are racist policies furthering the walling-up all over the world? What special challenges are people at intersectional standpoints, e.g. black lesbian women* facing in social movements? What are the focal points to pool resistance and make it more visible? Why is the domestic sphere still often invisible in political debates, even though systems of power are influencing it, and are being negotiated there? What roles do colonialism, neo-colonialism and decoloniality play in agriculture and in feminist perspectives? How is it possible to have political discussions so that everyone understands them and is able to participate?
What contradictions do these questions present, are there basic levels of agreements, or can we construct a wider frame in which we can accept these contradictions as diverse movements?

We want to look at the issues of different movements entangled and thus place them in relation to another: What are the topics that different movements want/need/can discuss among themselves and with others in regards to justice? What are common questions and what differences are irreconcilable? Can we celebrate these differences, or do we need to discuss them in every detail? What are requirements to form alliances? To stand in solidarity? What formats, actions, abilities, and reflections do other movements bring to the table? What role does political action through art, literature, music, everyday life, and social networks play for political movements?

Many, many questions – it’s about time we get together to talk, fight, exchange and practice! And we can make time and create a space for that.

The spaces and moments we want to create
We want to create a space that allows for retreat and reflection, for collective action and empowering exchange and a further development of our ideas, strategies, visions and enable a progress of the movements. Therefore, we want to not just organize talks and workshops in advance and keep ourselves busy in those, but to provide open spaces (Bar-Camp_Method) that allow all participants to get involved.
Also the organizing process is part of this approach: the more people are involved, and the more diverse the backgrounds and contexts we come from, the more people can feel invited to take part in all of this, to take something home and carry it on. Many things that will take place on the camp and provide a frame are already shaped in the organizing process: the spaces we create, mobilization material (that appeals to certain groups), awareness concepts we discuss, etc. That’s why we strive to get out of the “climate bubble” and already in the lead-up to the camp collaborate with other groups, contexts, perspectives and movements.

The context
The camp will take place in cooperation with the Klimacamp im Rheinland (“climate camp in the Rhineland”, www.klimacamp-im-rheinland.de). Klimacamp is happening yearly since 2010 near Cologne, Germany. It not only deals with climate change and lignite extraction, but explicitly aims to develop alternative ways of living together – as well as creating a creative and colorful resistance – according to the motto “System Change not Climate Change”. Take make this possible there is a lot of reflection, organization, planning and structuring in the preparation and follow up meetings.

Every year, new approaches are implemented, like the barrios (neighbourhoods that dealt with specific topics, such as anti-racism, queer-feminism, and agriculture) in the last two years, that are this year developing into an own camp.
From the 18th till the 23th the focus of the camp is eduction and networking and between the 24th and the 29th the priority will be on actions and action preparation. In the time between the 24th and the 29th there are different groups, coalitions etc. that call for days of action in the Rheinische Braunkohlerevier (brown coal area in the Rhineland).

How we are organizing
About every 6 weeks we have meetings for 2 till 3 days (see dates), to so called “orga-plena”. Besides these meetings we have regular phone calls, right now on a weekly basis. Everyone dials the same number to enter a virtual “conference hall” where we can talk with everyone. We also have quite a busy mailing list that you are welcome to join. Just send an email to connecting-movements-camp@riseup.net.

We are organized in different working groups, who can work relatively independent with the support and trust of the big group. This enables different people with different abilities and capacities to contribute to tasks they enjoy, and the big organizing process gets a little easier to digest.
Traveling costs can be reimbursed, more information on this or questions look at “next meetings” or write us an email.

Who “we” are and who we want to become
The group of people who up till now are dealing with the organization of the Connecting Movements Camp! work in particular in the areas of queer-feminism, migration and anti-racism, and agriculture (it is to note here that the positioning in different “single issue struggles” is only possible out of a privileged position).

The questions that arise from these issues are in part very different, but also overlap in many ways.  We as organization group would like to include and get to know many more perspectives, backgrounds, and approaches for that. Furthermore we want to reflect on and question our own positions to learn from each other and make the camp a place of multi-faceted exchange. We would love to do this with you!